If you are a vegan you can admit that some of the most attractive foods to your eyes are the ones that look green. One such example is pesto, a very popular Italian green paste used as a topping on many foods.

If we are thinking along the same lines you may be saying, “Yes I know it’s green, but is it vegan?”

Unfortunately, the answer is no, pesto is not vegan traditionally because of the use of parmesan cheese although with the rise of veganism people have found ways to make alternative forms of vegan pesto. However, for your benefit, we want to take things step by step before we get ahead of ourselves and explain what differentiates one type of Pesto from the other. We will also of course dive into the controversies surrounding the nomenclature.

Sacla Italia Free From Gluten, Dairy, Wheat Basil Pesto. is one of our favorite vegan pesto brands that we recommend you to try at least once.

The query” is pesto vegan?” has been in trend as per google and I am here to clear your doubts. Just stick with me for some time.

Why is traditional Pesto not Vegan?

Whether any food is vegan or not always boils down to how the substance is produced. If it contains ingredients that are from animal sources or obtained through the abuse of animals it is not vegan. Traditional Pesto is often referred to as Pesto Genovese.

If the substance is however obtained purely from plants without any harm to animals or the environment that allows them survival it is vegan.

The types of cheese used are from animal sources. To be more specific Parmesan cheese is from cows whilst, Pecorino is from sheep. As if that’s not enough, rennet, a type of enzyme also extracted from animal sources is an agent for curdling the milk.

To be fair, let us explore the other ingredients and how they are obtained. Remember in order for something to be vegan, it goes beyond vegetarianism to the methods used to produce it.

Are Ingredients of Pesto Really Vegan?

This is a vegan ingredient as there are no animals harmed directly or indirectly during its production as long as it’s organic and no pesticides are used in farming. Pesticides tend to disrupt the ecosystem and kill small organisms.

Basil also doesn’t consume a lot of water for its production, for instance, 39 gallons are used to produce a pound of vegetables. It also celebrates a low carbon footprint, it is thus for the most part sustainable to farm, causing no recorded significant damage to the environment.

Olive oil may seem vegan from a distance, I mean it contains absolutely no animal products or derivatives. There is also no animal testing involved after full production. So can we say olive oil is vegan?

Well, there are challenges in declaring it vegan. It most certainly is vegetarian, but here is however a flipside from an environmental standpoint. A lot of water is used up to produce olive oil. To be specific, 3900 liters are used to create a liter of olive oil. Olive oil production also presents a toxic waste problem because of harmful phenols produced.  In large-scale production, there are also a number of factors that lead to soil erosion.

The soil erosion is often used by water used in irrigation, which can run off from the plantation carrying the toxic waste as well.

Pine nuts are for the most part vegan except that they have a high water footprint which can make them debatable as an environmental factor. Over 9000 liters of water are used up to obtain one kilogram of pine nuts. They however have low destruction to the environment and no animals are hurt during their production.

This of cause is assuming no pesticides are used in maintaining them.

This is the obvious culprit and we did mention it before without getting into much detail. Cheese definitely also has a big water footprint in general. More than 5000 liters of water may be used to produce about a kilogram of cheese on average.

The carbon footprint is also high, it takes 13.5 CO2e to produce a single kilogram adding to the fact that a lot of destruction to land occurs during cheese production.

Land usage of the livestock kept to create cheese is a lot, whilst on the other hand, it takes a lot of plants to feed the very same livestock, so there is the destruction of plants involved.

This destabilizes the ecosystem and causes the unnecessary dying off of smaller organisms in large numbers.

The most obvious factor that renders this ingredient non-vegan is that animals are exploited, not only in the sense that their milk is taken but male calves are killed.

Calves considered unsuitable by the dairy industry are sold or slaughtered for veal. Suitable bulls are used for breeding since cows need to be pregnant to lactate.

Cows are also separated from the males after birth which leads to their distress. Needless to say, you can imagine how these cows are kept shackled and fed genetically modified foods in feedlots.

Their fate after producing all that milk by the way is to be eventually slaughtered for meat.

Can Pesto Be Vegan?

Several schools of thought hold the view that once the original ingredients of Pesto are tampered with or modified it can no longer deserve to be called as such.

This of course is a subjective opinion and it is entirely up to you to choose which idea to run with.

In this article, It is simply my intent to nourish your curiosity about what veganism is all about including what is vegan and what is not.

With the rise of veganism, there has been a reinvention of Pesto, where the factors that cause it to be non-vegan are of course replaced.

For the most part, what is replaced are the daily ingredients and we have to suppose the olive oil used is extracted traditionally.

Vegan Pesto Brands are on the Market

As mentioned throughout the article in order for something to be vegan it has to meet a lot of criteria besides being free of animal products or cruelty.

On the market, there are indeed a lot of products that purport to be vegan Pesto, most of them on the basis of being dairy-free.

The conclusion on whether or not they are vegan will largely rely on how the other ingredients are obtained.

Thus this may differ from product to product and the onus is on the consumer to check the ingredients or visit the official website of a brand to find out.

Suggested brands you can look into include:

Yes, Basil pesto can be vegan if Parmesan cheese is not used. All other ingredients are totally vegan and nutritional yeast which is vegan in nature can be used instead for the same cheesy color and flavor.

No, pesto is not dairy-free because of the use of different types of cheese like parmesan cheese, pecorino cheese, etc. However, you can use different alternatives to cheese to make vegan pesto.

Yes, red pesto can be vegan. Typically it is not vegan like others because of parmesan cheese. All you have to do is use vegan Parmesan cheese instead of the regular one.

No, Mellow mushroom pesto is not vegan because it contains milk and other animal-derived products like cheese. They have mentioned this on their website.

Tomato pesto is the other name for red pesto and red pesto is vegan if “vegan parmesan cheese” is used instead of the regular one. 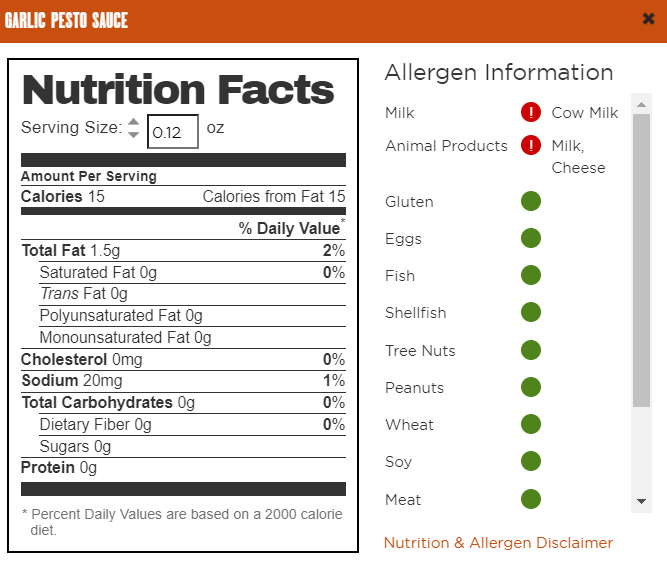 No, Mod pizza pesto is not vegan because it contains milk as one of the ingredients. They have specifically mentioned this on their website.

No, Aldi pesto is not vegan. I have searched their website and found no satisfactory information on whether their pesto is vegan or not. They only cite that “The only product line that we can assure you have no beef or pork traces in is our Earth Grown and Earth Grown Vegan product lines.” However, on reading through the ingredients of Aldi pesto I found that it contains milk and enzymes derived from eggs. Here is the image of the same: 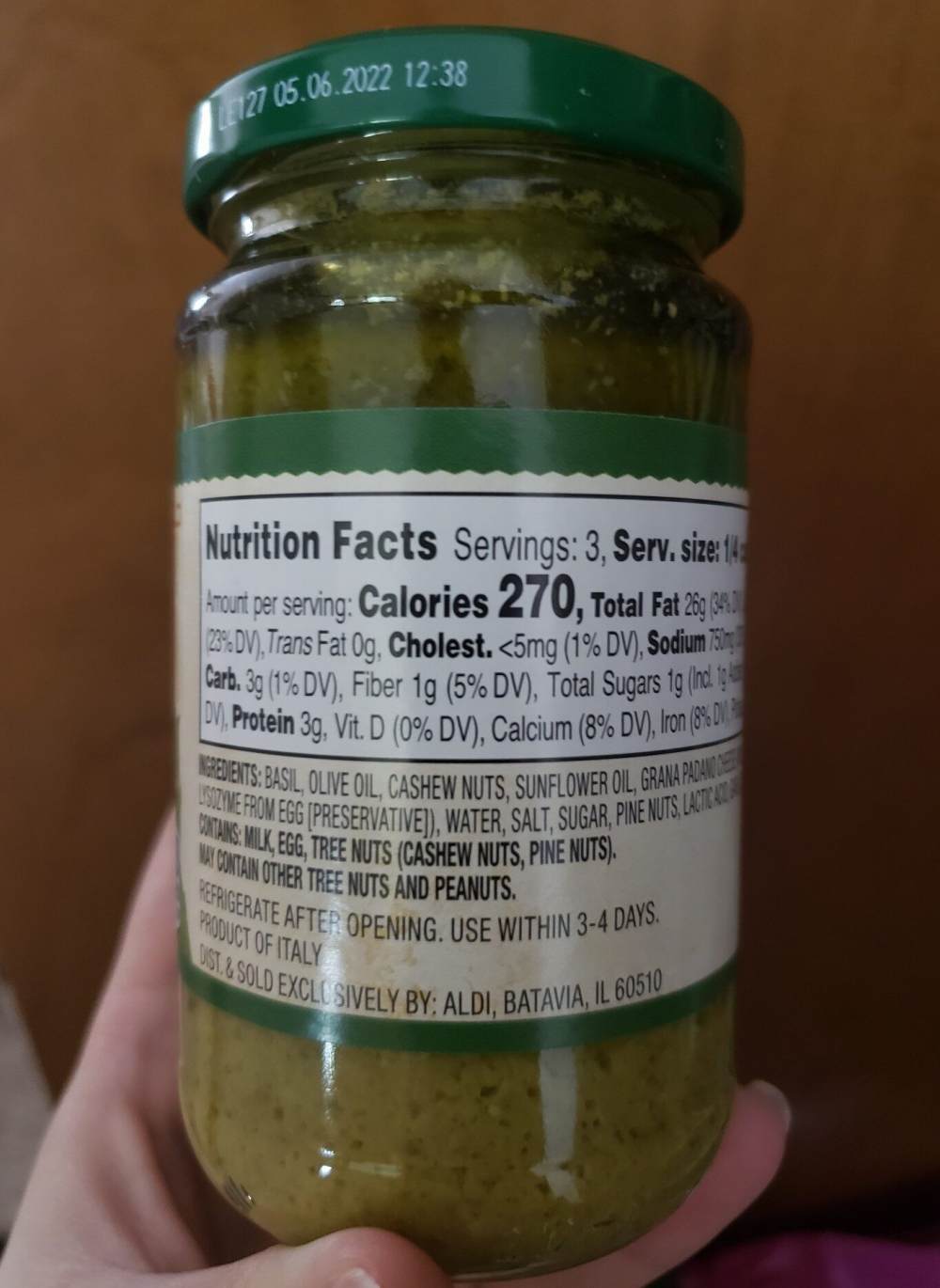 Apart from the exploitation of animals involved with some of the ingredients in traditional pesto and the environmental factors factored in. There have also been labor concerns behind each ingredient.

Just as we have concerns for the treatment of animals we very well have concerns about how the laborers in developing countries are treated to create the products.

In conclusion, the overwhelming verdict says, Pesto is not vegan.